Prague, 18. 9. 2014 – On Wednesday September 17, 2014 at the Conference Hall of the Czech National Bank there gathered nearly two hundred of financial directors at CFO Congress to examine whether this event can really be regarded as a "well spent day in the life of CFO," as promised by the subtitle of this year. In the foreground of presentations and discussions there was often a view featuring CFO not only as a precise beancounter over hard numbers, but as a team member, who must have number of soft skills in the arsenal and must be able to actively communicate across the company. The congress was prepared by Blue Events, together with Deloitte as expert guarantor.

Information-packed morning program consisted of lectures supplemented by continuously asked quiz questions so each participant could have the opportunity to anonymously share his positions and compare them to the average opinions of the entire auditorium. 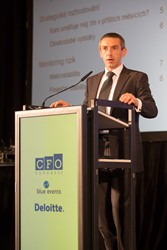 The first part of the plenary program was launched by David Marek, chief economist of Deloitte with his contribution "What should CFO know about macroeconomics." In twenty minutes, he summed up very clearly, how to understand the basic macroeconomic indicators and which statistical parameters of condition and development of the economy, the advance investigations or special indirect indicators CFO could exploit. "For example to me the state of tolling proved to be an interesting indicator for me - a higher toll booths means more runs, transporting goods, therefore it is an indirect indicator that the economy is on the upswing." CFOs do not have to monitor indicators on daily basis on their own, but when entering new markets or in other important business decisions they should seek advice from macroeconomists of the banks or consultants. David Marek warned that the seeds of crisis often begin with words: This time is different... In the end, however, he calmed the present participants that currently the Czech Republic is a safe, orderly up to a "boring" country with a potential of two percent growth - although no economic miracle, but at least calm certainty for the future.

Pavel Hrouda, Chief Financial Officer of GfK CR / SR, stressed the importance of non-financial KPIs for company management. An example might be regular monitoring of employee involvement, which supplements traditional financial indicators with information on the operation of the company in terms of human resources. Experience with this type of analysis indicates that, for example, an understanding of the company's strategy can often be more important for key employees than bonuses. Pavel Hrouda presented other examples of non-financial indicators of success that are the output of various surveys - such as net promoter score and other indicators of customer loyalty or non-financial indicators of success of the sales team. In many companies, these indicators are included not only in management score cards, but also the basis for setting goals and rewarding teams. 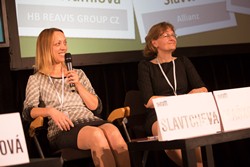 The conclusion of the first block was devoted to a discussion about the differences in male and female management style, whose main purpose was to revitalize the program and launch a wider debate with participants. It finally really succeeded so experience and witty comments of female panelists on stage ( Olga Humlová, Radka Mašková and Sonia Slavtcheva), were complemented by numerous stimuli from auditoria. 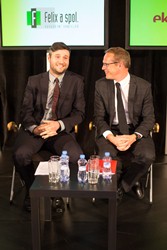 The second part of the conference brought an overview of various news from the world of information technology and law, which interfere with work of CFO in practical life. In their presentation Ondřej Ambrož and André Vojtek, specialists from law firms Felix a spol., pointedly renamed CFO to a "Centrum of Functional Responsibilities" and documented what it might mean in the light of the new legislation for CFOs and which negotiations, even completely transparent from the business perspective, can have impacts into the criminal law area also. For example, if the CFO is a board member it may happen that in relation to his duty to act with due diligence he may get into situations where he will have to prove that his actions in the context of business activities did not violate the boundaries of not only private but also criminal law. "The likelihood of these situations has been growing since the instrument of submission of complaints has become fashionable and also a way the counterparty may save money on commercial disputes", warned Ambrož.

Presentation of Libor Mudra, from the company Arval dealing with fleet management documented on specific examples that during vehicle operation there are often situations that may increase the initially estimated costs up to five times. 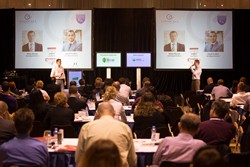 The performance of Josef Kadlec and Milan Novák from the company GoodCall for Talent on the role of social networks in the lives of CFO got very positive feedback. According to statistics in the Czech Republic there are more than 320,000 users of LinkedIn, among them more than 2,000 CFOs. As subsequently confirmed by a poll among the participants LinkedIn is for majority of those present an instrument which is actively used, whether for personal branding, as a source of information and networking with people they can potentially do business. On this professional social network there already are several expert groups for the CFO to which you can register and with their members you can share experience in real time, in addition even within a global perspective. Josef Kadlec gave practical advice on how to organize your profile the best. "It is very important, for example, to gather references from other people that will speak about their experience with you on your position", recommends Kadlec. Milan Novák adds: "LinkedIn company profiles are overrated necessity - personal sites of workers are the most active. If you want to share some information, the better chance is to spread it through the profiles of employees."

In his presentation Zbyněk Juřena, Altron Business Solutions, analyzed the practical conditions under which using cloud will pay off to the companies and how to make the data safe. It is important to decide in advance what data can be in the public cloud and which must be on a safer private repository.

One of the highest cost items of the company is often the lease or ownership of the space. Jaromír Smetana, Senior Director DTZ Česká republika showed on practical examples the common mistakes and pitfalls of lease agreements and introduced possibilities to better manage and reduce the cost of rents. 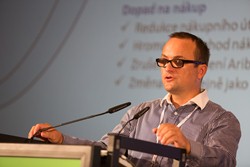 Marek Rokoský, KRC Partners, has prepared a very interesting case study of three specific firms, where there have been some changes recently, bringing great pressure on operating costs, that influenced also the purchasing department a lot. Model case situations with a direct link to the actual practice were the best warning on the possible risk of the participants. 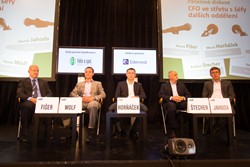 Marek Fišer, who has an unusual dual roles in HORMEN - on the principle of their interests he governs opposed department of finance and marketing – offered his perspective. Tomáš Wolf, who manages procurement of construction giant Skanska spoke about the relationship and cooperation of the company's purchasing and finance department. "The CFO should mainly trust his counterpart on the side of the purchase. Through the purchase there flows approximately 70% of the cost, which is not an insignificant amount," Wolf warned. Bedřich Štecher, director of Jaroměřická mlékárna, continued with this topic and spoke about the situation when individual departments of the dairy were buying cheaper items separately and the purchasing department catered only products that represented "big numbers" in the budget. This led to a confusing situation and wasted resources. The dairy found a solution in establishing central purchasing department, which made the individual processes more transparent and strategically picked up all purchases of the company.

Zdeněk Jahoda, owner and managing director of the Czech company Emco shared with the professional auditorium an uneasy experience when he had to close three small branches. "One thing was connecting all branches - that the company lacked an active CFO, who would be able to solve problems conceptually, there was only accounting," Jahoda summarized. Maroš Horňáček, managing partner of the company Mediaservis developed the idea of the qualities of the CFO further. According to him CFO should connect three key capabilities in one person: should be able to work with a team, should provide relevant and correct data in time and should shield everything with the initiative and proactive approach. "I would introduced a rule that every member of the management spent a day in real life of the company to understand other departments within the company and also knew the external context of business of the company so the CFO would become unifying factor that can explain his decisions and provide solutions," clarified his arguments Horňáček.

At the end of the discussion a list of possible improvements came from the ranks of the panelists as well as from the auditorium, to which a CFO and Finance Department should focus - from higher quality of evaluation of products and customers, through stronger reporting and spreading necessary information to other departments in the company, to understanding of business of the company to selected soft skills, that the right CFO should have.

The third Annual CFO Congress was prepared by Blue Events in cooperation with expert guarantor Deloitte and with support of many partners. Among them the most important one was the law firm Felix a spol.